«Our history and the history of Florenz begin here, in a very small campsite in Lido di Pomposa fonded by my family. My mom in the kitchen. My sister Arnalda and I at the food counter and Franco, who was already beginning to show his strong entrepreneurial spirit, at the petrol pump (which paid very well in terms of tips).
One day my father called Ultimo decided to accept the proposal to manage Camping Florenz in Lido degli Scacchi. It was a good bet, but my father was certainly not a fearful guy. Indeed, he was a determined and at the same time humble type, capable of transmitting great energy and, above all, the values of industriousness and altruism. My brothers and I literally grew up in the family business, worked hard and had fun and, growing up, we slowly began to take the reins. 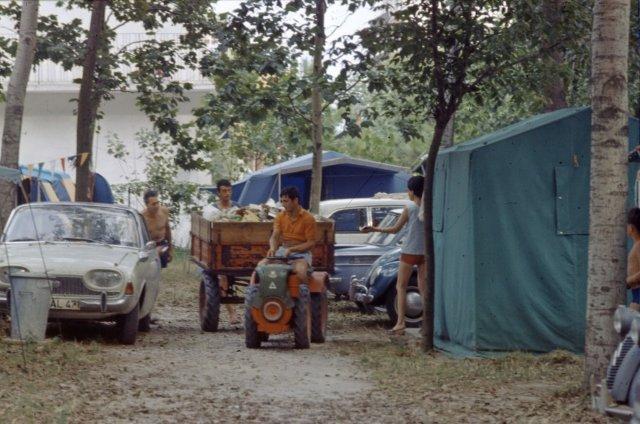 Thus begins Uncle Luigi, the elegant man on the left, when I ask him to tell me a bit of history of Florenz. Florenz, as you see it now, is absolutely different from what it looked like 55 years ago. The native vegetation was much poorer, made up of poplars and tamarisks. In two words: no shadow. The dunes then, beautiful vestiges of a past in which all our coast was characterized by these natural formations, had no grass cover and thinned from year to year. Grandmother Palmidina took care of the dunes, who decided to cover them with a layer of vegetable soil and subsequently worked in a gradual protection and greening work of which you can admire the fruits today. Uncle Luigi, on the other hand, took on the problem of the shadow: he dreamed of a beautiful shady pine forest like those found at the Lido di Spina and at the Lido degli Nazioni e Volano and so it was decided. The search for pine trees of an adequate size began at a price accessible to our limited finances. He turned like crazy and finally arrived in Pistoia, at the nursery of the Bartolini brothers. The negotiation was very hard but all in all he managed to get a great price and the deal was made. The adventure that led to the planting of 1100 pine trees that can be admired on the campsite started in 1997.

The whole village, in fact, from the grandmother’s dunes, to the uncle’s pine forest, to everything that followed and will follow, is the result of the passion of a family who in Florenz saw their home before his venture.
Looking back to our past, to these slightly yellowed photos, we realize that time has passed, but the spirit is still young.